Funny I did not realise my Creator could be talking to me through FB😱 that is one hell of a thought… or one heaven of a thought😍 ….but when you think about it … why not? Here’s how it happened.

Only yesterday I looked at my Cherry blossom tree which is just bursting into flower and asked God “Please,  can you let me keep this tree without it toppling over.  I know it seems foolhardy,  but I really love these flowers. So ,  should I cut it or trust you to hold it up for me? I can trim it a bit more maybe …? ”   and I left my conversation open ended. I thought that I would have to take a decision soon.

I should explain that the tree next to it –  an older and  much more solid Ficus of double the girth  – came crashing down in heavy rains in November 2017.  We usually park our cars beneath them, but that evening a guardian angel nudged my brother to step out in the down-pour and move both cars further up the road to where there were no trees.   He had hardly returned when he heard a prolonged creaking sound … and whilst he watched, the Ficus slowly and carefully pulled away from its roots and fell right across the road.

Writing this I realise,  why oh why did I  not see before that the tree,  guided by its Creator,  was gently untangling its roots to keep the boundary wall (which was just one foot away)  intact?   We all said it was a miracle but the more I think of it the more it astounds me.  You will see from the pictures below how close the tree was to the boundary wall and the house- and how huge!!  And yet it fell without even an inch of damage!! 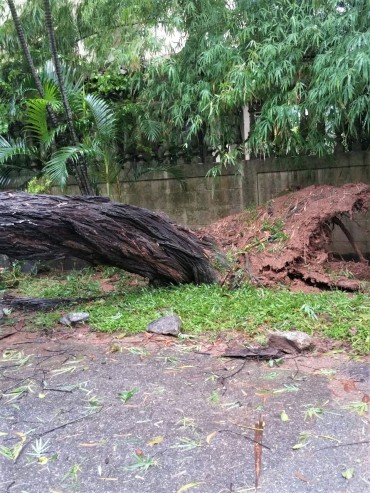 The Girth. Had to be split in two to be hauled away. A part still remains. 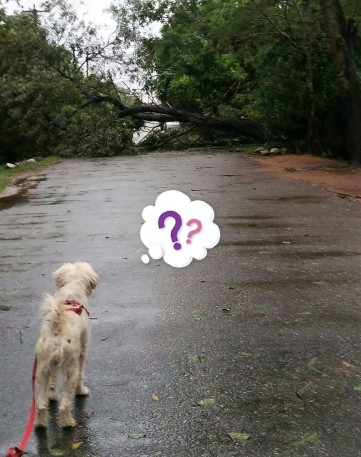 And the connection between God and FB ?

Well after I whispered the prayer for my tree yesterday,  FB reminds me today about a post written three years ago to the very day : –  a post I had totally forgotten about titled Earth’s crammed with heaven and referring to – you guessed it – my Cherry Blossom tree.

And what is so uncanny is that FB never EVER has reminded me of posts on my WordPress blog,  but “chose” to remind me of this less than 24 hours after my whispered my prayer/question to God.

I had trimmed  the branches when brother Ficus came down as ‘Sherry’ was more exposed to heavy gusts but was still not sure if to take her down completely   ?

So through FB’s reminder  – incredible as it sounds – I believe God was reminding me that Sherry had been saved before and I should not worry.   I believe I can now keep her around some more to give glory to her Maker with the most beautiful and fragile of flowers that makes your heart sing.

Indeed as Elizabeth Barrett Browning  wrote ..  “Earth’s is crammed with heaven and every common bush afire with God.”

Woke up on a mundane Monday morning to the most awesome sight.  The tree outside my balcony had burst into bloom. 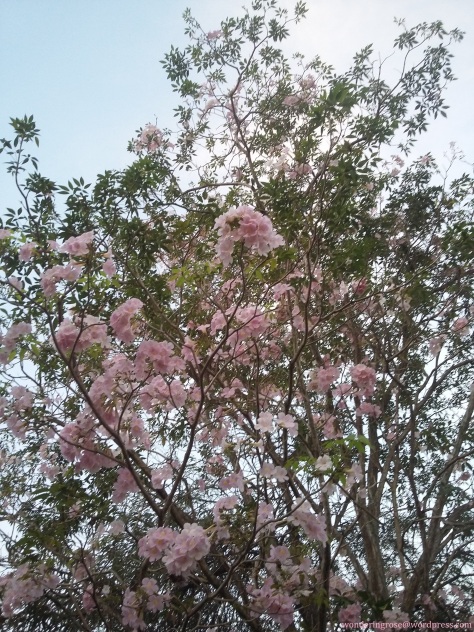 The sight that met my eyes !

I looked up again and noticed the moon was still out .. perhaps hating to leave the scene of such beauty 🙂

Even the moon refused to move away 🙂

Delicate, paper thin, shadowy pink flowers so ephemeral they  would bruise to the touch. Some were floating down and I stretched out my hand for them to land on. The ground beneath was a carpet of pink.

The sight leaves you dazzled … wanting to burst into laughter,  scoop up the flowers, embrace the tree for giving you such a vision.

The tree which is just outside my front door poses a serious threat to my boundary wall and roof. You can see how close it is in this picture. 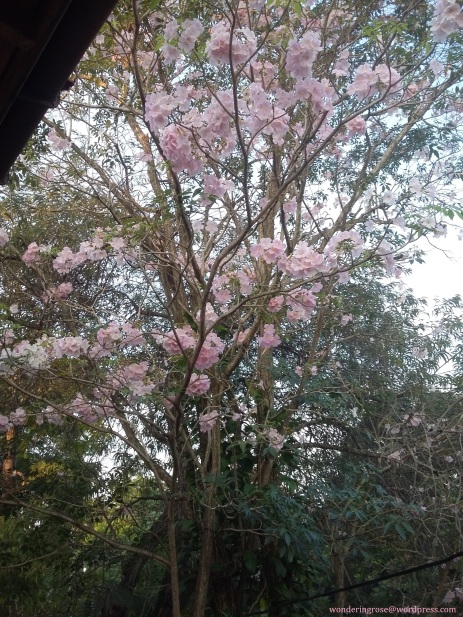 That’s the  roof jutting out on top left. Too close for safety ?

Many have advised me to cut it and yet I can’t bring myself to do this and and lose the glory of this sight when it blooms – once, sometimes twice, a year.

Elizabeth Barrett Browning must have been referring to such a vision when she wrote :

Earth’s crammed with heaven,
And every common bush afire with God,
….. But only he who sees takes off his shoes.

Eventually, I tore my gaze away and looked across on the other side of the balcony.  There stood another tree that I really admire, a lone sentinel rising above its neighbours, in majestic competition with my flowering cherry blossom tree.

A solid and stable sentinel every day, unlike the ephemeral blossoming tree, I have to recognise this tree too or it will feel left out 🙂

Sharing with Mundane Monday challenge of Jithin though this is ‘cheating’ for it is anything by mundane. At least it was taken on a mundane Monday 🙂   and also sharing with Jacqueline’s Echoes of my Neighbourhood challenge which brings so many many places to your doorstep.